This series attempts to open up a space for conversation – to have a critical discussion around and ask questions about the concept of the cyborg and its representation in popular media – like films, television and fine arts.

It was be a no-holds bars fight between The Terminator (1984) staring Arnold Schwarzenegger and Judge Dredd (1995) staring Sylvester Stallone. This event was curated by Phaedra Shanbaum.

female version of its Cyborg vs. Cyborg screening series. This event is curated by Elinor Carmi.
Introduction by Prof. Sarah Kember.
1. Ghost in a Shell – Is one of the most famous Japanese anime films released from 1995, and based on a manga comic. A female cyborg cop and her partner hunt a mysterious and powerful hacker called the Puppet Master.
2. Æon Flux – Began as a sci-fi animated TV series on MTV during the early 1990s, it then turned into a film in 2005 starring Sharlize Theron. Aeon Flux is a mysterious assassin working for the Monicans, a group of rebels trying to overthrow the government. When she is a sent on a mission to kill the Chairman, a whole new mystery is found. 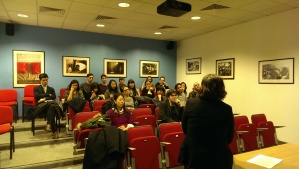 Enter the Screen! This event is curated by Mihaela Brebenel. 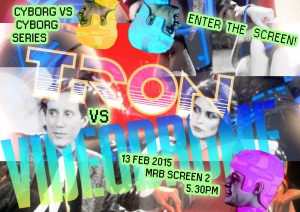 Tron (1982) dir. Steven Lisberger – the original Tron which saw the more recent legacy series, where a software engineer and game developer steps into the screen and enters a belligerent digital world. He is faced with a choice to fight for his life inside of this world.

Videodrome (1983) dir. David Cronenberg – where someone steps into another type of screen. This time, the CEO of a small television station enters their TV set screen driven by fantasy, desire and greed, an immersion leading to their demise.